Вернуться к списку
The history of ‘Maison Dellos’ starts its count fr om 1996 when Andrey Dellos opened his first restaurant ‘Bochka’ with homemade Russian food, welcoming fire of the open grill, relaxing music and unusually cosy atmosphere. Here the entertainment policy was conceived which totally manifested itself later at a Ukrainian restaurant ‘Shinok’. The main point is to transform the centre of the room into a stage where all the action relevant to the spirit of the place takes place. ‘Bochka‘ has an open grill wh ere whole lambs are being roasted, while ‘Shinok‘ boasts an imitation of country life with a real horse, goats, roosters and a shepherdess.

"Le Duc" and "Manon"
In 1998 a new project appeared, a French restaurant Le Duc with interiors of a Gothic castle in medieval France, classical music, chef-d’oeuvres of French cuisine and extensive wine list with more than 500 items. Le Duc was the first Moscow restaurant which kitchen was headed by world famous chefs, holders of several Michelin stars – Jérфme Coustillas, Eric le Provos, Michel Del Burgo. Now it is replaced by Manon, one of the most fashionable places in Moscow, a trendsetter of capital’s club life.

"Café Pushkin"
Café Pushkin restaurant, opened in 1999, is the most famous project of Maison Dellos. It is one of the few Moscow restaurants that got into Europe’s Top 25 and World’s Top 100. Café Pushkin is a piece of old noble Moscow in the centre of a modern megalopolis. Its amazing atmosphere and excellent cuisine conquered Bill Clinton, Condoleezza Rice, Madeleine Albright, Nicolas Sarkozy, Jack Nicholson, Quentin Tarantino, Angelina Jolie, Will Smith, Meryl Streep, Arnold Schwarzenegger, Sophie Marceau, Gérard Depardieu, Fanny Ardant, Catherine Deneuve – this is just a small part of all celebrity guests of the restaurant. The autographs of the world stars occupy 4 volumes of the guestbook of “Café Pushkin” and to name all celebrities one will need tens of pages.

In 1999 A.K. Dellos opened a chain of cafes under the name of Moo-Moo, which soon gained well-deserved popularity in Moscow.

The end of 2005 was marked by opening of the biggest project by A.K. Dellos . The luxurious restaurant looked like a palace and bore a name of Turandot . The refurbishing, decorating and preparation process took six years to accomplish, but the result was worth waiting for. Elegant tablewear, antique furniture, classical music, exquisite European and Oriental cuisine can be experienced in a luscious setting of Chinese-esque interior.

The legendary Parisian department store Printemps saw Cafe Pushkin appearing on its first floor in July of 2010. The cafe’s interior is rich in Russian references. Russian style reveals itself in full grandeur in the wonderful dessert menue. Honey cake, gingerbread and Praga gateau by Emannuel Rion conquer the hearts of French and feed on nostalgic feelings of Russians stranded away from home.

2013 has become a year of further expansion for Maison Dellos. Two new restaurants were launched on the other side of the Atlantic, in New York. ‘Manon’ is spread over three floors in the heart of Meatpacking district of New York. The chef Tae Strain and pastry chef Beth Bosmeny create local seasonal dishes and experiment with the best of world cuisine.

The other one, Betony, is a new restaurant of modern American cuisine with an outstanding bar menu. It is located in Midtown Manhattan and has already been awarded three stars from The New York Times. The chef Bryce Shuman used to work as a sous-chef at Eleven Madison Park, one of the most famous and critically acclaimed restaurants of New York.

Recently Dellos Air Service starting operating. It provides catering on board of airplanes of Dellos Air Service. Here you can find a wide range of dishes from restaurants of A. Dellos. It is easy to find a cuisine you like, be it Russian and European cuisine of Pushkin, Bochka and TsDL; Italian of Casta Diva; European and Oriental of Turandot; European of Manon; or Ukranian of Shinok. 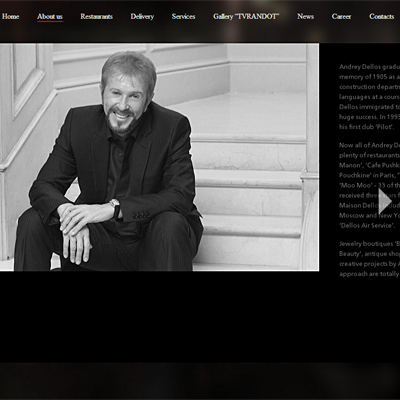 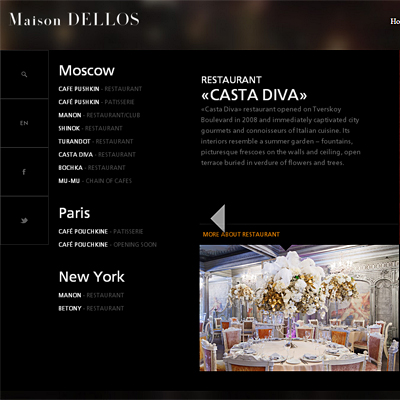 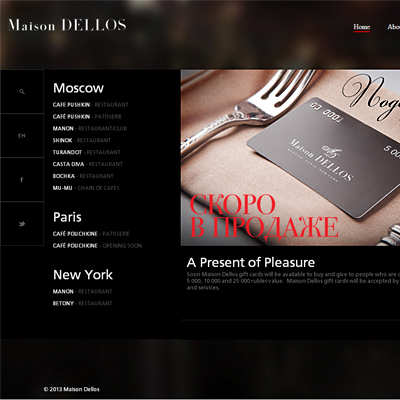 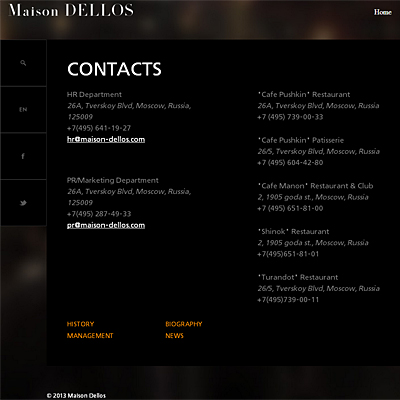 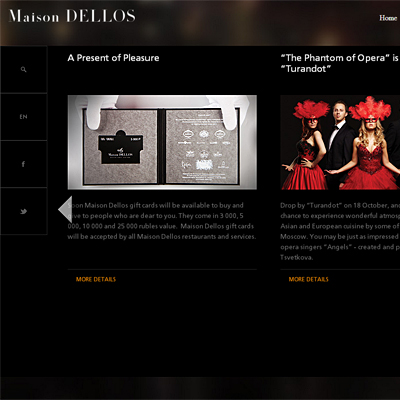